Those few seconds before we hit, the ones outside of time where my eyes would not shut and my arms held my baby, play over and over in my head. Wet road. Gray rain. Swerving back and forth uncontrollably across both lanes. Motion so strange it seemed almost humorous. A wheel caught, we spun completely around, and we're thrown sideways off the road into wet rock dirt.

I can remember holding Anna and trying to form a bubble around her as we hit. Then it was dark. We heard glass shatter and the two of us lay pinned under a pile of luggage on the ceiling of the van, rain dripping on and through its exposed belly and side. I couldn't move my arms except to pull her closer. "Get this off of her!" again and again into the backpack pressed against my face.

Light appeared as Eric and Luke began pulling luggage and instruments off us. I felt her moving and myself praying. She started to scream. I ran hands over her head, trying to assess damage. More praying.

Moments earlier the van had been filled with laughter-- all of us almost giddy at the beauty we were surrounded with, our recent basketball game with monks, and Matt's getting the wind knocked out of him on account of slipping on Yak poop. Our driver literally had to tell us to calm down for fear we'd pass out in the thin air. We were so high up, so far away from even the Chinese things that had begun to feel familiar. We really knew only that we were a dot on the miles of rotting road between one larger Tibetan city and a few tiny mountain villages.

The minutes and emotions that filled the van just after we hit were nothing short of sacred.

We understood this much:
-Death had come and we somehow got away.
-The rain wasn't about to stop.
-Mia was bleeding. She couldn't move.
-We were in the most remote place we'd ever been on this earth.
-Night would be here soon. 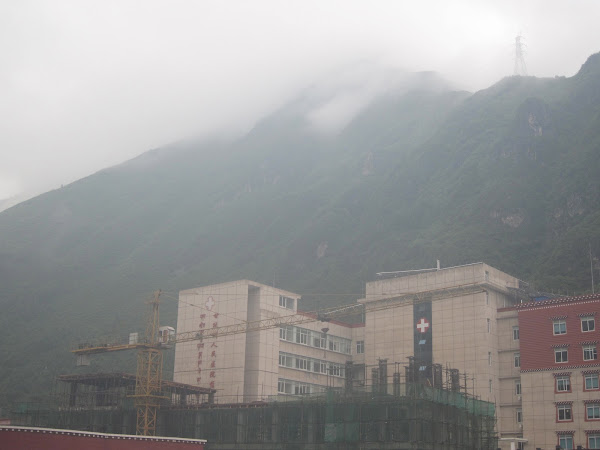